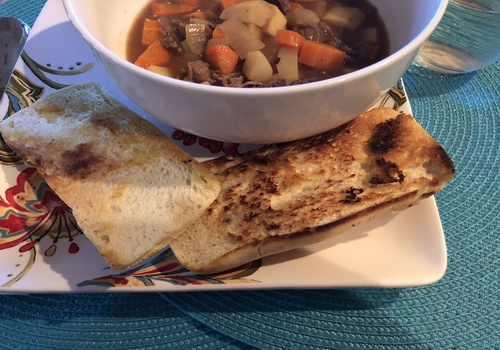 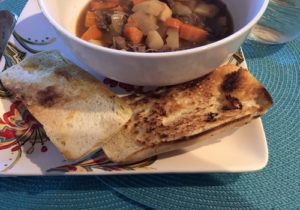 This stew looked so good from the picture on the recipe card.  From the minute I opened the box, I was looking forward to it.  In fact, the flavor is really not bad, and honestly, any soup with potatoes is comfort food to me.  But unfortunately, the steak they send for this dish is all wrong.  Just wrong.  The good news is, this recipe is a food hacker’s dream.

Tasting: This is a beefy soup, thanks to the demi-glace, and has added richness from red wine and tomato paste, and a lot of vegetables.  They wisely leave well enough alone, and don’t send pasta to make it more hearty.  The mistake they make is sending thinly shaved steak, when cubes of meat are called for.  The ribbons of beef in this soup are just the wrong mouth feel.  Also, they send one roll (although the soup is meant to serve two) and ask you to grill it in a frying pan and then eat it dry, thereby depriving yourself of self-respect.  Why, Home Chef, why?

Cooking: This recipe starts with putting chopped onion, carrot, celery and potatoes into a pan with olive oil and salt/pepper.  The beef, for some reason, is cooked separately, and added in at the last minute.  Once the vegetables are cooked, you add a little tomato paste, and some demi-glace broth concentrate and about 2 cups of water.  Then, separately, in a pan, fry these shavings of beef in some olive oil.  Add them to the soup with some cornstarch in water to thicken, and according to Home Chef, it is ready to go.  Heat some olive oil in a pan, slice the roll in two, and place cut side down to toast in the olive oil.  (Toast made this way tastes pretty awful, but I did it, because I review these recipes as they are sent, despite my better judgment.)

If you want to make this dish as they send it, but a little better, then cut the beef into smaller pieces before you brown it.  As for the bread, put it under the broiler until it is golden (watch closely), and then take a clove of raw garlic, and rub it over the surface of the toast.  Using a pastry brush, brush olive oil over the toast, then sprinkle with sea salt.  Voila, Spanish style garlic bread.

Got cheese?  How about some French onion soup?  Slice the onion in two, then slice from root to stem into slivers.  Add to a pot with a little butter and olive oil, and put over low heat, stirring occasionally, until deep golden brown.  Meanwhile, halve the roll, then cut into large squares for some big croutons.  Toss them in a bowl with some olive oil, then put them onto a baking sheet and put into a 350 degree oven for about 12-15 minutes until they are golden.  When the onions are ready, deglaze the pan with half of the wine, then add the demi-glace and 2 cups of water, and some salt and pepper.  Simmer over low heat for 10 minutes.  Get your broiler ready.  Ladle soup into an oven proof bowl, float croutons over, then cover the top with shredded cheese.  The ideal cheese is gruyere, but you can also use mozzarella, parmesan, or even white cheddar.  I have never tried pepper jack, but I wouldn’t be averse.  Broil until the cheese is bubbly.

OR how about a French dip with fries?  Start by microwaving the potatoes for three minutes, then plunge them into ice water to cool down.  When cool, dry the potatoes, peel them, and slice them into fries.  Heat some oil in pot until 250-370 degrees, then fry the potatoes for only about two minutes (they won’t have any real color yet), then remove to absorbent paper to cool.  Next, slice the onion, and heat some olive oil in a frying pan.  Add the onion, and cook until it is caramelized.  Remove to a plate, then add the beef to brown.  Season with salt and pepper.  (Or use a grill for the meat, if you prefer.)  In a small pot, mix the demi-glace with 2 cups of water.  Now finish the fries with a last trip to the hot oil, remove to paper again and season with salt.  Split the roll and toast it.  To plate, put the beef and onion on the toasted roll, put the hot beef jus into a bowl for dipping, and serve with the fries.

Something more exotic?  How about sukiyaki.  Seriously, you can make sukiyaki out of this.  Here’s how.  Slice all the vegetables: slice the onions, cut the celery and carrots on the diagonal, and slice the potatoes.  In a pan, sauté the vegetables one by one with the goal of leaving them crunchy but getting a little color.  (In addition to these vegetables, add any others that you may have about, especially mushrooms, or snow peas, green onions, or other vegetables that lend themselves to stir frying.)  Then flash fry the beef, and as you are doing so, sprinkle over about ¼ cup of sugar.  If you have any rice noodles or angel hair pasta, you can prepare those.  Prepare the demi-glace with 2 cups of water and 2 tablespoons of soy sauce (you could add some sliced fresh ginger and green onions to the broth if you have it.)  Serve everything on a plate, along with a bowl of hot soup, and a raw beaten egg.  Rinse the vegetables in the broth, and enjoy.  For the meat, after you rinse it in the broth, dip it in the raw egg.  Really, trust me, it is delicious. 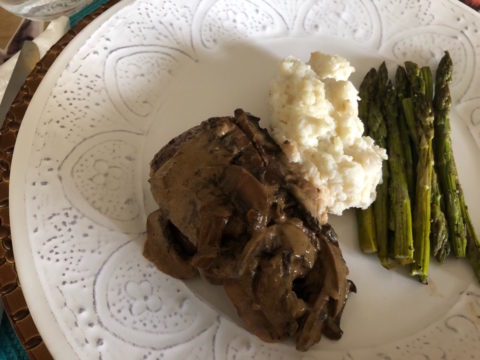 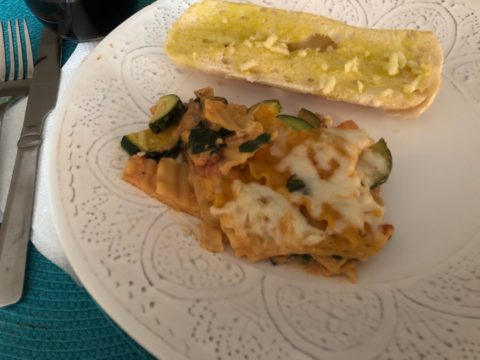