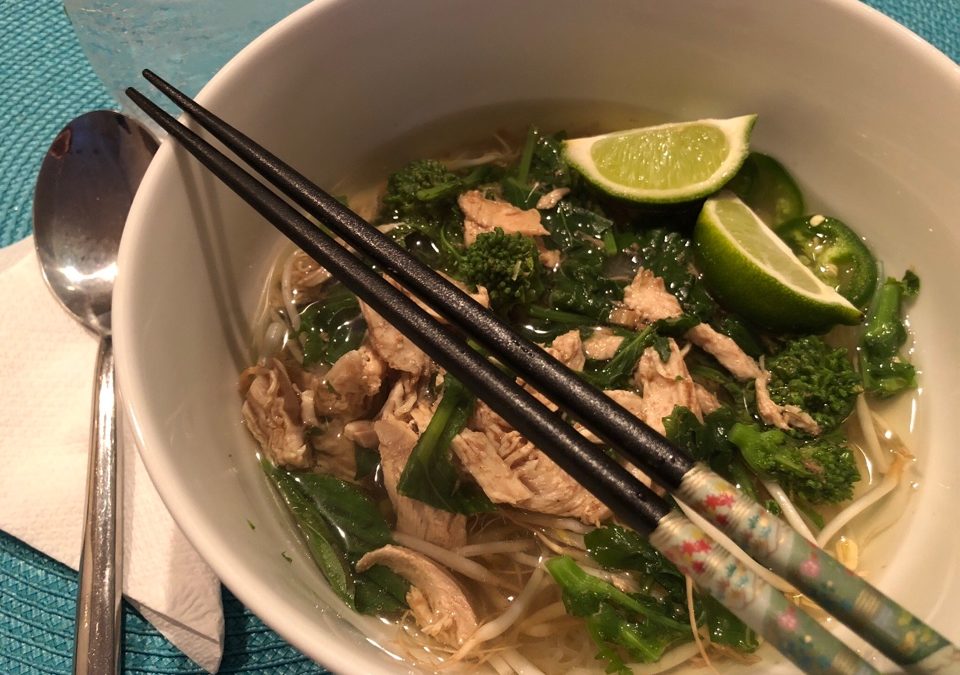 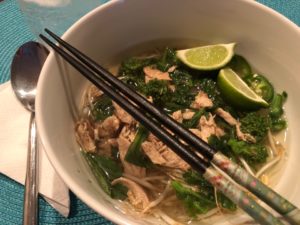 So close! This is so close to being good.

I love pho ga, and could probably live on it. I made this dish with high hopes on one very cold and rainy night after work. I needed pho ga. It would make up for so much. But then I sat down to a big, steaming bowl of disappointment.

Tasting: Seasoning! Where is the salt? This is ridiculously bland. I realized I was chasing salt. My hack of the moment was adding some fish sauce, but it needed seasoning integrated into the construction of the dish. Also, I love this dish for the broth. I wanted more of that. Instead there are bland noodles, bland chicken, bland bean sprouts, and not enough flavor or seasoning. So disappointing.

Cooking: This dish begins by asking you to cook chicken breasts. Normally when I make this I bring some water or broth to a boil, add the chicken breasts, bring it back to a boil, immediately turn it off, then cover and let it stand for about 20 minutes. They do something similar, except they actually boil the chicken for 5-7 minutes, then you have to shred it while it is hot. I thought the cook on the chicken looked a little iffy, to be honest. But it does get cooked a bit more later, so I thought I wouldn’t die of campylobacter that night.

All the noodles need to cook is a quick soak in hot water. But there is a magic trick, which I will share below as a hack!

Once the chicken is shredded, it goes back into the broth with fish sauce and shredded mustard greens to wilt the greens. Serve the noodles in a bowl, and ladle over the broth with chicken and greens. Top with bean sprouts, jalapenos, and herbs.

Hacking: This dish needs a lot more depth of flavor. Pho is a fresh, clean tasting dish, but it needs to have some richer flavor. Also, there should either be twice as much broth or have as much chicken and greens. It is a soup after all.

So let’s cook the chicken with some seasoning, then bake it in a 375 degree oven for 20 minutes. Also, let’s give a quick stir fry to the mung beans in a little sesame oil in a pan, and season with some salt. Let’s do the same thing for the greens, which can be seasoned lightly with some soy. My philosophy is that every that goes into the soup tastes good, then the soup will too.

Here is the magic trick: Heat about an inch of oil in a wok or a frying pan. When it is hot, put in the uncooked dry noodles, pressing them into the oil with tongs. They will puff up into a crispy rice noodle garnish. So fast, fun and delicious!

To serve this soup, you need to have a generous amount of chopped green onions, herbs like basil, cilantro and mint, some crushed peanuts or cashews, limes to squeeze over, and extra fish sauce and chili oil. Eating this requires a spoon and a fork, but to tell the truth, if I’m alone, I just drink the rest of the broth straight from the bowl! 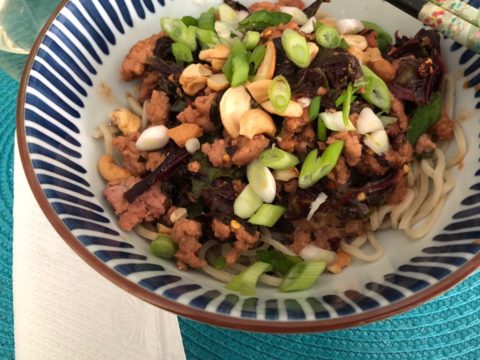